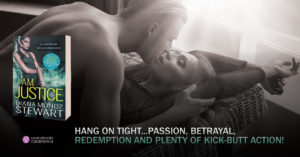 One of the challenges of being a newly published author is helping readers who like romantic suspense with a strong female lead find my book. For example, check out the ad on the right. Full credit for this beauty goes to my publicist at Sourcebooks.

It definitely brings the heat. So much so it was banned on Facebook. That should be an ad in and of itself, “BANNED ON FACEBOOK.” Haha! Although, to be honest, I’m not sure why it was banned. I’ve seen much steamier ads. I appealed to Faceboook, but they’re pretty adamant about keeping this away from the delicate sensibilities of FB users. Avert your eyes if it’s too much.

So, yeah, I wasn’t too bothered by this rejection. My romantic suspense is a bit steamy, but it’s also action-packed with a fierce female lead and a kick-ass cover that I LOVE, so I decided to concentrate on those aspects. That’s how I ran into my essential problem. People naturally assume a male lead on the cover of a romantic suspense, looking all tough and capable, is going to bring the heat. But they make totally different assumptions when a fierce female is on the cover all by her lonesome.

Sadly, before I knew better, I created an ad that played up my fierce female.

The ad on the right features Justice, the main character in the novel, and one of my favorite quotes from a reviewer. “An intriguing premise, a cast of strong characters unwilling to back down and black-hearted, deserve-to-die villains make I Am Justice a winning start to an exciting new series.” BookPage Top Pick

So I pulled together the ad below using Julie Ann Walker’s great book blurb. “Fast-paced and edgy, high-octane, and sexy, I AM JUSTICE is a must read!” 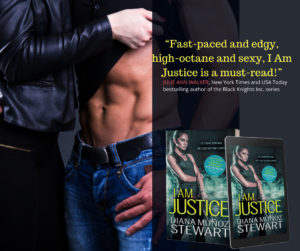 To me that  seemed a home run. It hit all the buttons–sexy times, abs, action, abs, leather and a strong female lead not afraid to strip a man and show off his abs. More importantly, the ad wasn’t banned. Phew. It also didn’t draw enough eyes. Too dark? Is the woman being too aggressive? Not sure. I’m sure there are a bunch of professional marketers right now rolling their eyes–write me, give me your free advice. I kept trying. A lot. Thanks for all the great support Facebook and Twitter followers! I was kind of surprised when the ad below seemed to strike gold. 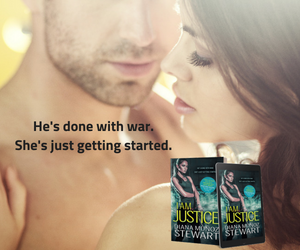 In some ways, I can see this ad seems to have it all too. Sexy-fun times, the hint of a strong female lead with the phrase, “she’s just getting started,” and a hint of suspense with the word “avenger.” The word “humanitarian” also makes it seem more contemporary and hopefully less urban fantasy. So how do you sell an edgy romantic suspense with a fierce female character? Apparently, by making her look slightly more approachable and feminine. Yeah. Kind of a let down for me too. But I guess when people have only a few seconds to decide in this crazy, e-world there’s not a lot of room to try something different.

Okay, I want to know what you think. Am I wrong? Can a tough-looking female on the cover work in other genres that aren’t urban fantasy? Do you have examples of first books in a series covers with a strong female on them? Or am I right? When it comes to putting a determined-looking female character on the cover of romantic suspense or any genre that isn’t urban fantasy are we behind the times?

“What is grief, if not love, persevering?” 💔 #wandavision

Today's the day!! Join us for our livestream chat with the wonderful @LoriLFoster!! Today at 1 PM EST we're talking NO HOLDING BACK. This kick-a** vigilante story is right up my alley. Join the group to join the fun, ask questions, and win prizes! #books
https://www.facebook.com/groups/isntitromanticbookclub