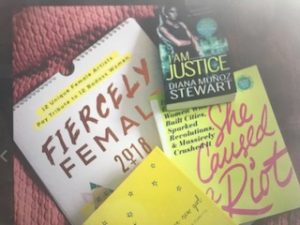 Although we’ve seen real progress in equality around the world, global abuses and national backsliding can make all of us feel disheartened. And, yes, furious. Cue a romantic suspense series about a badass band of vigilantes that travel the world righting wrongs against women. It’s catharsis. Let’s call it book catharsis. That’s kind of why I wrote the series.

I had the idea for the League of Warrior Women after reading articles detailing injustices against women. One of the articles was about María Santos Gorrostieta Salazar—a small-town mayor in Mexico who took on drug cartels and was eventually killed. Her story and others made me wish for a group like the League—a superhero-like group of women, sisters, who travel the globe righting wrongs against women.

The Parish family’s fierce females explore their own brand of justice. And it’s exhilarating and action packed and sometimes shocking. Makes sense, right? It would be irresponsible to send a group of vigilantes out into the world (even a fictional world), taking brutal actions against abusers, without showing how that retribution looks. Or without asking the question, “Is this the answer or is this vengeance creating another problem?”

That’s part of the book catharsis–exploring what that rage can do, without actually hurting anyone. It was equally interesting for me to explore where the male/female relationships, and men in general, fall in the evolving quest for equality. The love interest in I Am Justice is an ex-Special Forces turned humanitarian, Sandesh Ross. He became a humanitarian because, “I’m done walking through each day with my hands balled in fists. I’m done questioning when the violence I did helped, when it hurt….”

So we have two characters, with a high amount of chemistry, trying to make a difference in vastly different ways. The question becomes can their steamy heat help them to find common ground, find a way to work together as the bad guys close in? You’ll have to read it to find out!

I Am Justice, and really the whole BOS series, also asks the question some people worry about–will equality go too far in the other direction, giving women power at the expense of men. (I have a lot of opinions about this fear, but that’s another blog post.) The League is setup to give power to women. Along the way they might have skipped including men. In  book one Tony Parish–brother to Justice and the first male ever adopted into the covert sisterhood–feels ignored and treated like a second-class citizen.

Justice who is, as Savanna Walker of BookPage put it, “a tropes of the badass, snarky male action hero” has zero empathy for her brother. She’s not vicious about it. She’s just that focused on her mission. But mistakes, battles, falling in love with Sandesh, along with the family drama, helps to open her eyes to how she’s excluding her brother.

Ahh, book catharsis feels good. So until that idealized time when girls are safe to walk to school, women are paid equally to men, free to drive cars and control their own destinies, we can enjoy safe, effective book catharsis in this romantic suspense series.

I’d love it if you’d share other books and series that have a therapeutic effect. After all, book catharsis isn’t just the territory of romantic suspense and I’m always on the lookout for a new book or series.

2 thoughts on “Disheartened by the state of the world? Romantic suspense provides book catharsis”

If you're wondering why Louisville is protesting, Breonna Taylor was gunned down in her own bed and the 9-1-1 call from her boyfriend was just released.

She wasn't killed on camera so white people might have missed it, but I wrote about it here.
https://www.thenation.com/article/society/breonna-taylor-was-murdered-for-sleeping-while-black/