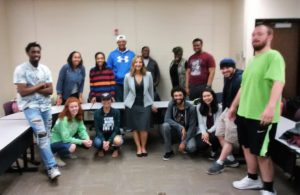 As you probably know, I am currently embarking on a yearlong journey to do one thing a month that makes me nervous. Better known as the Year of Stepping Out of my Comfort Zone. What you might not know, or even suspect, is that I have cool friends. And sometimes serendipity. When cool friends and serendipity collide there is nothing I can do but ride that wave.

Here’s the serendipity. During my rock climbing challenge in month two, I thought to myself, “If you really wanted to do something that scared you, you’d try public speaking.”

I shuddered and pushed that horrendous idea away. But later that day, after I posted about my rock climbing adventure–never mentioning the public speaking part–David Hewitt, a friend and teacher at the Community College of Baltimore County,  asked me if I wanted to speak at his college. Yep. Serendipity.

Here’s the thing, it’s easy when you’re on a successful rock-climbing high to accept an invitation to speak in front of a creative writing class, but then the day draws nearer and nearer and nerves start happening. Public speaking. *shudders* I once read people fear it more than death. Totally understandable.

Okay, I’ll admit I baby-stepped the public speaking. David knows my fear of pubic speaking very well–we gave a talk together in our MFA years–so he asked if I’d be more comfortable with a smaller group. Duh. There were fourteen students in the smaller class, but they were wonderful. A better group I couldn’t have asked for. Wait. I did ask for them.

The students were smart and interested, with a lot of good questions. It turns out public speaking is so much fun. I can’t believe it either. I actually said to David afterward, “I expected a lot of things today, but I hadn’t expected this to be fun.”

So thanks to Dave and CCBC for inviting me and thanks to the thoughtful and intelligent students!

To recap, I’ve gone flying, rock climbing, gotten a cool tattoo, and have faced the public-speaking dragon during this year-long quest. May is next and though the first book in my Band of Sisters series is launching on May 1st, I’m not going to count that as my one thing. Even though I am nervous about the release and feeling out of my comfort zone, I will be doing something else for this month’s challenge. I have no idea what that is just yet. If you have any suggestions for adventures, be sure to send them my way!

To continue the trend of doing public things, I’ll be hanging out at the Empowered Women on a Mission launch party on May 7th. It’s on Facebook, so no real public speaking, but there will be interaction and prizes!

4 thoughts on “Out of my Comfort Zone in Public”

If you're wondering why Louisville is protesting, Breonna Taylor was gunned down in her own bed and the 9-1-1 call from her boyfriend was just released.

She wasn't killed on camera so white people might have missed it, but I wrote about it here.
https://www.thenation.com/article/society/breonna-taylor-was-murdered-for-sleeping-while-black/

The arrest of the CNN crew in #Minneapolis is a direct result of Trump’s incitement against media - months & months of his “fake news” and “nasty questions” and other attacks against journalists must be blamed for this.

Journalists arrested live on TV in an ostensible democracy