I want to tell you a story about a video. It all started with Facebook. Strange how so many things in my life start with Facebook – another post, another day. About a month or so ago, I’d complained on Facebook about FB, once again, rejecting one of my ads. No matter how much I tried to “clean-up” the ad, leaving much to the imagination, it 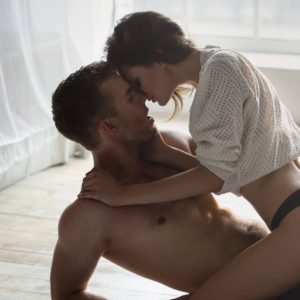 would be rejected for, “…featuring an image containing excessive amounts of skin or suggestive content.”

Okay, I’m not going to deny it. My ads, like my books, have skin in them. People wear that skin everywhere. And they don’t make a secret about it. Show offs. I can also admit that Facebook has a point the image on the right is kind of suggestive.

My brother Radames, who runs a marketing firm in Puerto Rico, commented on my FB-complaint by offering help. He’s such a great guy! He walked me through a couple of things for FB ads. Asked about some ads that I had run. Gave me advice. During this process, I told him that I had just seen a video on FB for a book and how cool it would be to make a video for I AM JUSTICE.

He told me he had a guy who did videos and could introduce me. It wasn’t expensive, so I was thrilled. Problem. The guy only spoke Spanish. My brother, who does speak Spanish, joked with me, “You said you wanted to learn Spanish this year.”

Ah, right, me and my big mouth. So now I have a video designer* that I’m trying to communicate with about marketing romantic suspense in a language I have a very basic knowledge of.  (This is the part of the post where I picture my brother laughing, because basic knowledge is being generous.)

And Rada was right. I did learn a bit more Spanish. So I began working with this person. He sent me a video. I sent back instructions. Slightly imperfect instructions. He sent another version. Finally, I noticed that his responses were getting slower. I figured he was busy. I got the last video and was thrilled, but when I tried to put it on FB– you guessed it – they rejected it. I take full credit for this rejection, because I knowingly gave this guy an image that had been flagged by FB. Before I tell you the end of this story, here’s the racy video.

You have to have an eagle eye to spot that image!! Facebook has some puritanical algorithms. Anyway, after this video was rejected I reached out to my brother. He said that his designer could revise, but that we had to be patient with him. As it turns out, the person who designed and made this gorgeous video lives in Venezuela. And he was having issues with power. If you’ve read anything about what’s happening there you know it’s not just issues with power. No power, no water, people are starving, and rioting. Desperate for food they are taking food from stores. If you’d like to learn more, you can read some news stories on Venezuela HERE.

So I woke up today struggling with a bunch of different drains on my time and energy. And as I tried to center myself, rally myself to create art despite some of the pressures happening in my life, I thought of this man. And I shut up all the chatter and got down to work. Because if someone in Venezuela – with all that country is going through, with all he is going through – can get himself up every day and make art, well then, I can too. And maybe you’re having a day where you needed to know that someone, against a lot of great odds, is doing what they love, making art, and creating beautiful things that help others. If so, keep creating. As Picasso said, “Art washes away from the soul the dust of everyday life.” 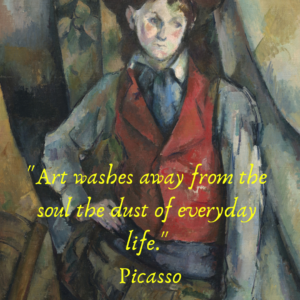 *Not sharing the designer’s name, because I don’t have permission to do so.

PLACES TO DONATE TO HELP VENEZUELA

4 thoughts on “A Story About A Video”