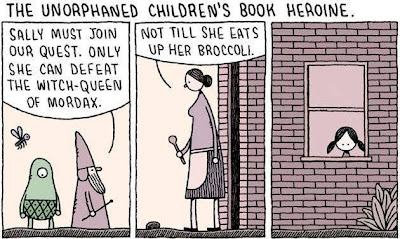 The above cartoon is pretty funny. Mostly, because it’s true. We’ve all read the young adult novels where the parents are dead, too busy to supervise, or just too uncaring or ditzy to look into what’s up with the protagonist. On one hand, this makes sense. Most YA stories are about the main character finding his/her own strength and taking control of his/her own life. The protectiveness of parents and guardians can be an impediment to this journey. Beyond that writers of YA have been told that adults are boring, slow down the action, and add unwanted complications. And yet, most teens have to make their real-life journey of self-discovery–with their own real life pressures–while dealing with their real life parents or guardians, so wouldn’t the presence of these parents or guardians be more relatable? In fact, there are a few good arguments for why YA could use some living, concerned, though not fake-perfect, parents.

Set-up Character–How a character acts or relates with their parents or guardians (and their home life in general) is a great way to show the reader who your character is deep down. If they have an issue with mom always telling them to stay away from gluten or reminding them what an STD is, that’s an opportunity to show your character rolling their eyes, gritting their teeth, gently assuring mom or dad that he or she has it under control, or burping a dismissal. This all tells us something important about that character, their patience level, respect for family, likability, humor, and even self-confidence.  In addition, if home situations are relatable, readers will better bond to your character. Who hasn’t been mortified by something a concerned parent said while friends were over? Don’t believe a scene with a concerned parent can do all that? Have some American Pie:

Set-up Motivation–A lot of what teens do or don’t can be traced back to their parents or relationship with their parents. For example, we all remember that girl in high school with over-protective parents who abides their rules and never wants to do anything that “might get her in trouble.” I might have been her. Conversely, we also fondly remember the girl with over-protective parents who fought them every inch of the way–climbing out the window on a rope made of sheets (my sister did this), finding ways to circumvent their rules, and creating general mischief. Showing who a character’s parents are, what their goals for their children are, what their rules are, and even what type of work they do, can go a long way in explaining why a character acts or doesn’t act in a novel. This can also be a great way to enhance the arc of your character. She might start out as the good girl afraid to get in trouble, but in the end she’s all about kicking vampire ass. Knowing a character’s relationship with their parents can also fill in the blanks on why your character isn’t acting in their best interest, continually seeks to hide things from their friends, or can’t say yes when the boy or girl of their dreams asks him or her out. As Amy Rose Davis writes in Parents and Children in Fantasy, “There are many paths to character-driven literature, but one important tool along the way is to examine where your characters came from.”

It’s Been Done to Death–Sometimes both parents are missing in young adult fiction, but often it’s the mom that’s been killed off. I think that’s because fathers were once considered the less “active” parent, and you didn’t want your main character  running home to tell mommy when things got bad. Having a loving mom doesn’t make for adventures–just ask any Disney princess. Although the decision to kill off one or both parents can pave the way for character responsibility, opening up greater freedoms, it’s also been, as this NYT article points out, done to death. And with any overused plot device or trope, this detail feels less like reality and more like a convenience, creating little character sympathy and making your story seem hollow. Trying something different, creating a very normal, every day relationship between guardians/parents and teens with the obstacles this naturally brings about can strengthen your skills as a writer in addition to giving your characters and their world more dimensions.

Missed Opportunity–Adding in a responsible parent in your YA story doesn’t necessarily mean you need to create the perfect parent. The key here is real. Real parents yell, get distracted, try and fail to help–all of these things can add an interesting layer to character and to your character’s life. Eliminating real parents in YA as author, Kait Nolan points out in her article, Where are the parents in YA Fiction?, can be a “missed opportunity for conflict.” Having a parent that cares about their child doesn’t mean that you need someone there that is always solving your protagonist’s problems. That’s as unbelievable as some of the YA parents that are unable to even cook for themselves. But having a parent that is a genuine character, flawed, overreaching, and still caring can add to conflict, plot, and character development. In my novel, MIND TRAVELER, my male protagonist has a very caring father. His father gives him advice, discusses things with him, embarrasses him, and makes real trouble. He also helps his son at a key moment, advancing, not hindering, the plot.

Balance–If you’re writing a dystopian or time travel novel the world itself can be dangerous and unstable enough that adding in loving parents and guardians helps to balance things out. It can give the sense of some real world continuity, that there’s someone running the ship even though the ship might be taking on water. So your main character may be dealing with traveling through time in your dystopian novel (don’t knock it until you’ve tried it), but they still have to be accountable for getting their chores done and for taking care of their younger siblings.

So the next time you have a weak plot, motivation, or character issues you might want to go running home to mommy.

6 thoughts on “THE PARENT TRAP IN YOUNG ADULT BOOKS”