In the run up to the Olympic Games of 2012, as unlikely a team as ever can be imagined, trained with heart, gumption, and grit, to send one of its participants to be a member of the first ever female boxing Olympians to contest in the Games. While no member of the team was able to fight in the London Olympics, their storied ascent into international amateur female boxing was inspirational.

The efforts of these remarkable young women was featured in an award winning documentary film entitled, The Boxing Girls of Kabul, by Canadian filmmaker Ariel J. Nasr.

The 2012 team, under the leadership of Mohammed Saber Sharif, trained in the gymnasium contained in the Ghazi Stadium in Kabul—the very stadium where the Taliban executed women for adultery and other crimes throughout its murderous reign.

Eventually dozens of young women and girls came through the boxing program, learning the rudiments of the sport using borrowed boxing equipment, a space, by the way, without so much as a boxing ring to learn the basics of how to spar.  Still this plucky group of young practitioners of the sport defied the strictures of gender norms to pick up the gloves to learn the sweet science as best they could—spurred on by their male counterparts who came to know these brave young women as boxers who shared their same dreams of Olympic glory.

The closest this unlikely team of sheros ever came to the Olympics, was when Sadaf Rahimi was offered a wild-card berth in 2012 – an option to compete granted to nations that might not otherwise be able to qualify. While she had been training hard to participate, her lack of competitive experience eventually led the International Boxing Association (AIBA) to revoke its invitation, citing concern for her safety in the ring.

This did not daunt Rahimi nor other members of the team to keep on training and competing as best they could – not only to refine their skills in the sport, but to continue to fight against the very real concerns for their safety at home as the stability of their country and the place of women remains risky at best.

Their experience, however, was never easy—and while the young women practiced their jabs and hooks, they were also fending off very real threats to their lives and the lives of their families. Rahimi herself has since immigrated to Spain because of threats she received, making a new life for herself while continuing to box.

Others, however, have remained to continue the struggle. These include Coach Mahomood Shah Mehrebuddin, who in 2018 noted the National team had 120 members of whom 30 where women. Another is women’s boxing team veteran Shukufa Haideri who has been boxing for ten years and remains a strong proponent of women’s rights stating emphatically that other Afghan women must “get out of the house, fight, learn, do sports … to build a better future for our country.”

The sport of boxing is never easy. The complexities of learning the nuances of boxing are myriad. To do so as a woman, is all the more difficult in a world that can be unforgiving at best, but to do so, literally under the threat of losing one’s life for even thinking that it is possible to learn the sport, gives new meaning to the concept of “heart” in boxing.

The women of Kabul who continue to contest in the sport defy a daily diet of fear in order to pursue their dreams, something a true Shady Lady should know something about. 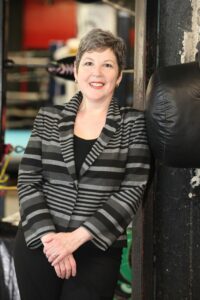 Malissa Smith is the author of A History Of Women’s Boxing.

Allow me to introduce you to @TheLillysRock and Toni Bennette (yeah, that's her real name) also known as...
🤩THE GIRL WITH STARS IN HER EYES🎸
Order here: https://bit.ly/GetTheLillys
@SourcebooksCasa #GWISHE #thelillysrock
#thegirlwithstarsinhereyes

This was such a great read! 💙