Recently my life has been transformed by the publication of my first novel, I AM JUSTICE. This has led me to a wild and wacky year. This year’s wackiness was compounded by a challenge I made to myself to do one thing a month out of my comfort zone. So far? I’ve rock-climbed, took flying lessons, gotten a tattoo, went white water rafting, taught at a college, had a personal chat with G.R.R.M, signed books, introduced myself to a 300 writers, editors, and agents, and traveled across the country and through Canada. And that’s just a few of the things that has come from this challenge. Which brings me to a recap of my August through October challenges. Drum roll!

In August, I drove to West Virginia and went camping in the Appalachian Mountains all by my lonesome. And, here’s the thing, it was spontaneous. I just decided to do it. I think that’s the best part of this challenge, I have an idea that I want to try and instead of that little voice that says, “Don’t be stupid” another voice says, “Sure. Why not?” The drive down took about ten hours. Not too bad. Honestly, the hardest part was parking the T@b. With a little help from the camp host–who had the patience of a saint–I managed to get it pretty well situated. I never unhooked it from my Jeep. That’s a whole other level of skill, kids. If I needed to go anywhere, I went on foot. Below is a photo of a deer that greeted me at my campsite: 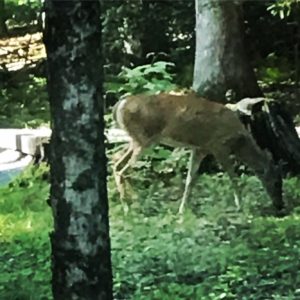 After I got situated and spent the night listening to the wild, I woke up, made myself an outdoorsy breakfast, and went for a hike. Yeah, that was a bit terrifying. I love the woods, but it takes on a whole new flavor when you’re alone on an unfamiliar trail in the freakin’ mountains. Mostly though, it was just peaceful. And I was lucky enough on one of my three days there to witness an outdoor mountain wedding. Adorable.

I have to admit that it was a bit weird not having good cell reception. It really made me feel isolated. But that was the point. Or so I kept reminding myself. All in all, I would do it again.

At the end of August I finished the book 3 in my romantic suspense series. That means books 2 and 3 will be released next year! More on that later! Sorry. One post at a time. Where was I? Oh, yeah. In September I tried sailing. I suck at sailing. Don’t ask. Just imagine me sitting in a daffy little two-person boat, holding useless lines, and drifting aimlessly. Kind of like my life at times. I have a hard time believing that was the best thing that happening in September. Uhm. This is so embarrassing.

October was a big month.Way, way out of my comfort zone. I participated in my first panel at the Bucks County BookFest! Now I love my books and want them to be read widely, but self-promotion is so awkward. Stop-looking-at-me awkward. I’m much more comfortable talking about my novels. But I had a bit of serendipity in the self-promo department that month. After reaching out to someone at the Doylestown Book Shop, I was asked to take part in my first panel at the first annual Bucks County BookFest. 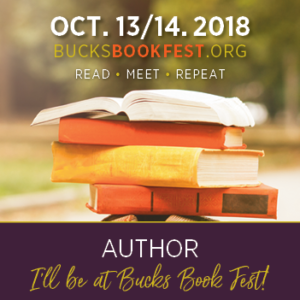 Turns out that Doylestown–a quaint city in Bucks County, PA and a hotspot for artists–has never had a book festival. The panel I was invited to speak on focused on contemporary fiction. I was lucky enough to share the stage with Damian McNicholl and Stephanie Powell Watts. Both authors have written interesting, female focused novels that push the boundaries of genre. Our moderator and event coordinator Ellen Green made the entire experience relaxed and interesting. Honestly, I wasn’t really nervous at all. I think that’s because I was up until 3 am the night before. Not with nerves. I was trying to make sure people camped out on my lawn didn’t freeze to death. They were there for Oktoberfest.

You see my family has an annual Oktoberfest party. Chili contest, moon bounce, haunted hayride, family, friends, and a canoe filled with beer! This is a huge undertaking. Over a hundred people attend. We had people arrive on Thursday for the Saturday event. It was a group effort and so much fun!! I have the best family, friends, and neighbors in the world! But this event–not enough room in the house, so we had campers and tents– just happened to be the night before the BC Bookfest. That meant I spent the night partying and socializing which made me a zombie for my first panel.

If lack of sleep made me into a zombie, the pleasant moderator and fascinating panelist helped me look good. Everyone was so kind and interesting. I, on the other hand, had to focus to try and understand the questions. It was so bad, I was trying to listen to Stephanie’s answers in order to remember the question. D’oh! Next time, I’ll try not to look like I’m going to eat the other presenters’ brains. After this event and Oktoberfest, I flew to Florida for a family reunion.  Not sure it qualifies as out of my comfort zone, but it had its moments. While in Florida me and two of my sisters visited a clown college. That was totally in my comfort zone, but I had to mention it because it was so awesome!

Tomorrow I fly to California and will attempt to play out of my comfort zone. I’m so excited! Sun and wine and something crazy and new I can write on this blog. In November I’m heading to World Fantasy in Maryland. I’m going to have to pick up the pace and the drama to end this year. Let me know if you have any suggestions for end-of-year challenge. I’m doing a video of whatever I decide to do. That’s two out of my comfort zones for the price of one!