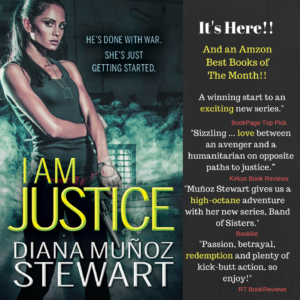 I was so excited to receive the questions for my BookPage interview. The questions were really insightful and helped me to get my own thoughts in order for all of the marketing hoopla, including my wonderful radio interview with Cindy Dees. I’ve posted the beginning here, but because this interview doesn’t belong to me, you’ll have to follow the link at the end to read the rest. I think it’s worth clicking over!

“Wherever society, misogyny or callous disregard let bad things happen to women, the League would be there.”

Romantic suspense fans often list the tough, take-no-prisoners heroines of the genre as one of its biggest selling points, but Diana Muñoz Stewart takes things to an entirely new level. The first book in her new series, I Am Justice, introduces readers to the League of Warrior Women, a multicultural group of talented, ferocious women dedicated to combating misogyny and oppression. We talked to Stewart about flipping gender stereotypes, the most intimidating part about writing I Am Justiceand which real-life activists inspire her.

What inspired you to create the League?
I had the idea for the League of Warrior Women after reading a series of disturbing articles about injustices against women. Specifically, I remember reading about María Santos Gorrostieta Salazar—a small-town mayor in Mexico who took on drug cartels and as a result was threatened and beaten, her husband was killed, and she herself was eventually killed. Her story and others I read made me wish for a group like the League—a superhero-like group of women, sisters, who travel the globe righting wrongs against women. Wherever society, misogyny or callous disregard let bad things happen to women, the League would be there.

One of my favorite aspects of Justice’s character is that she follows a lot of the tropes of the badass, snarky male action hero. Was that an intentional choice on your part?
I did consciously play with the classic perceptions of action heroes and gender roles. The female character is all guns blazing while the male hero, who is an ex-Special Forces soldier turned humanitarian, wants to help in more nurturing and caring ways. Though they can both handle themselves in an explosive situation, the male lead, Sandesh, started a charity to help those in need. And the female lead, Justice, is that angry, combative snarky action hero—hopefully with a little more depth. I think this about sums it up: “He’s done with war. She’s just getting started.”

How do you write action scenes that are compelling and not confusing?
This question makes me so happy. If you’re asking that, it means that I succeeded in doing something that I worked very hard at. When I first started writing action scenes, they were a bit too detailed. It slowed down the pacing with unnecessary description and emotion. I went from this abundance to paired-back scenes that my agent, the wonderful Michelle Grajkowski, kindly pointed out were too light on detail. So basically, it was through trial and error that I found, and continue to try and find, that sweet spot in writing action scenes.

There’s a debate throughout I Am Justice as to whether the Parish family and the League should stay predominantly female, or should accept more male members. Where do you stand in that debate?
Oh, good question! The thing I like about the Band of Sisters series is that it tackles this exact question—how men and women can work together to create positive change that benefits everyone. And since I’m not into excluding anyone, I like the idea of adding men. But the League is run by Mukta Parish, and she’s a bit of a hard-ass on the subject. Still, the answer to this question is more fully fleshed out in I Am Grace, the sequel to I Am Justice. I won’t be spoiling anything by saying that the League will always be comprised of mostly women, but as the group develops and finds more love interests willing to become part of the family, it’s inevitable that they add a few more men to the group.

What scared you the most about writing this book?
The idea that I might come off as flip or callous with the serious subject matter in the book. Walking the line between entertaining and speaking about and for people that aren’t always the heroes in books was daunting. There were days…READ MORE