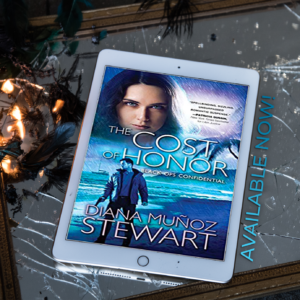 It’s release day!! I’m so excited to be sharing The Cost of Honor with all of you! This is the third and final book in my Black Ops Confidential series. I’m excited and emotional to be ending this creative series, but looking forward to The Bad Legacy series coming in 2020!

If you’ve been with me since the beginning of the Black Ops Confidential journey, you know that this series once had a different title. And, in fact, books 2 and 3 also had different titles. My point is, lots of stuff gets changed in the editing/publishing process.

These changes can and do include the story itself. I’m going to share some insider info. At one point The Cost of Honor had two endings. 😱In fact, the ending that was published almost wasn’t the published ending.

To be clear when I say ending, I’m not talking a few chapters. Nope. I mean a whole 100 pages different ending from what was published. So how did I end up with two different versions of the same novel?

Well, after I handed in the completed draft of The Cost of Honor, I received advice from my developmental editor. She had a problem with something the male lead experienced in that original version. 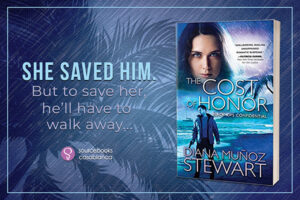 If you’ve read The Cost of Honor, you might remember the event I’m getting at. If you’ve read the book and desperately want to know if your guess is correct, write me at diana@dianamunozstewart.com, and I’ll tell you.

I decided to give the change a try and see how I felt about it. Still, changing this one event meant everything that came after it, about a hundred pages, had to change.

After rewriting all of those pages, I sent the new version, let’s call it Honor 2, to my main editor, Cat Clyne.

One catch. I still have no idea how this happened, because I’m so careful about this kind of thing, but I accidentally sent the original version back to Cat! 😱

I didn’t notice that I’d made the mistake until Cat, who’d been editing this version, reached out. I was HORRIFIED! Really, I felt terrible, sick to my stomach. We were on a deadline to get everything together, and this mistake definitely wasn’t in keeping with that plan.

Anyway, Cat was incredibly nice about it. She told me to send her Honor 2. I did. She read it, and told me that she actually liked the first, original version better. 🤪

She asked me which version I preferred. Though I really liked some of the things that had happened in Honor 2– there are some really sweet and intense scenes–I decided that I preferred the first version too.

So the original version, with the male lead still having that experience, is the one that went to print, and what you’ll read in The Cost of Honor. One day, I’d like to share Honor 2 with all of you dear readers.

I’ll probably send that version out some time next year as a free download for my newsletter subscribers. Just for fun, because I honestly believe the original version is the way this novel was meant to be experienced.

Sure, it was a quirk of fate that I sent the original version and not Honor 2, but that one mistake–one that I really beat myself up about–ended up working out for the best.

How about you? Have you ever had something happen that you thought was a disaster that ended up being for the best?

Links for The Cost of Honor!