Skip to content
Recently my husband and I purchased ten acres of a land by a lake, Lake Nockamixon. The property itself is a mix of beautiful views, mushy uneven ground, and stuff. What kind of stuff? Uhm, stuff like this picture below.That’s Bart. A friend. He found a crossbow while helping to clean the property. We weren’t paying him, so good on him for finding something of value. 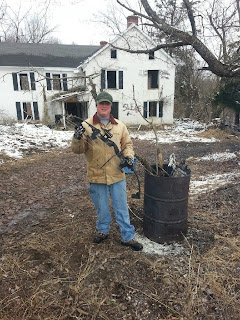 The house in the background was built in 1780. It belonged to one family for ninety years, and when I stand at the side door and look down to the lake, I can easily imagine the life of the last woman who’d lived there. She passed away about ten years ago. According to her family, she lived a great life with much love. The property was sold to a developer, and ended up in our hands after a series of unfortunate circumstances for him that ended up as our windfall. 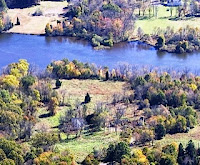 To the left is an aerial view of the property. It looks so clean! It’s not. Not only does it have a tragically unstable farmhouse, but there’s a decayed barn with some ancient heavy machinery inside. I have no idea what it was used for, but it has a lovely rust patena. There’s also silo made of cement. Oh, and because the property was essentially abandoned for ten years, people have adopted it as a town dump. So imagine old tvs, mattresses, a punching dummy, and well trash all over this property. Yeah, lots of stuff to clean, but it’s kind of like that joy you had exploring dirty places as a kid. A bit of mystery wrapped up in wonder laced with delicious fear. Fear of spiders. Lots of big spiders on our property. And tires.
Did you know you can’t just throw away tires? You have to pay to have them disposed of–like taking out a mob hit on Goodyear. Most people are a bit squeamish about paying someone to take our their tires. It’s much easier to drive their tires to a secluded place and leave them, hoping they’ll never make it back home. They don’t. We have a lot of tires to get rid of. Some of the bigger tires, truck tires and farm equipment tires can cost twenty bucks to terminate. We have about fifty. I feel like their lives should be spared, pun intended, like they can serve some good elsewhere as a swing or something, but so far I have had no luck in finding anyone who wants them.
So it’ll take some time, but one day we will build a home here, and I will kayak along the lake in the mornings, just because I can. Until then, I will be spending my weekends with my kids and my husband picking up the trash we spent our life’s savings on. It’s like that song Wonderful by My Morning Jacket, “It matters to me, took a long time to get here/ But if it would’ve been easy, I would not have cared.”
File this under life is good, when you get to play in the dirt. But remember to keep an eye out for spiders.

8 thoughts on “Lakeside Property with A Twist”