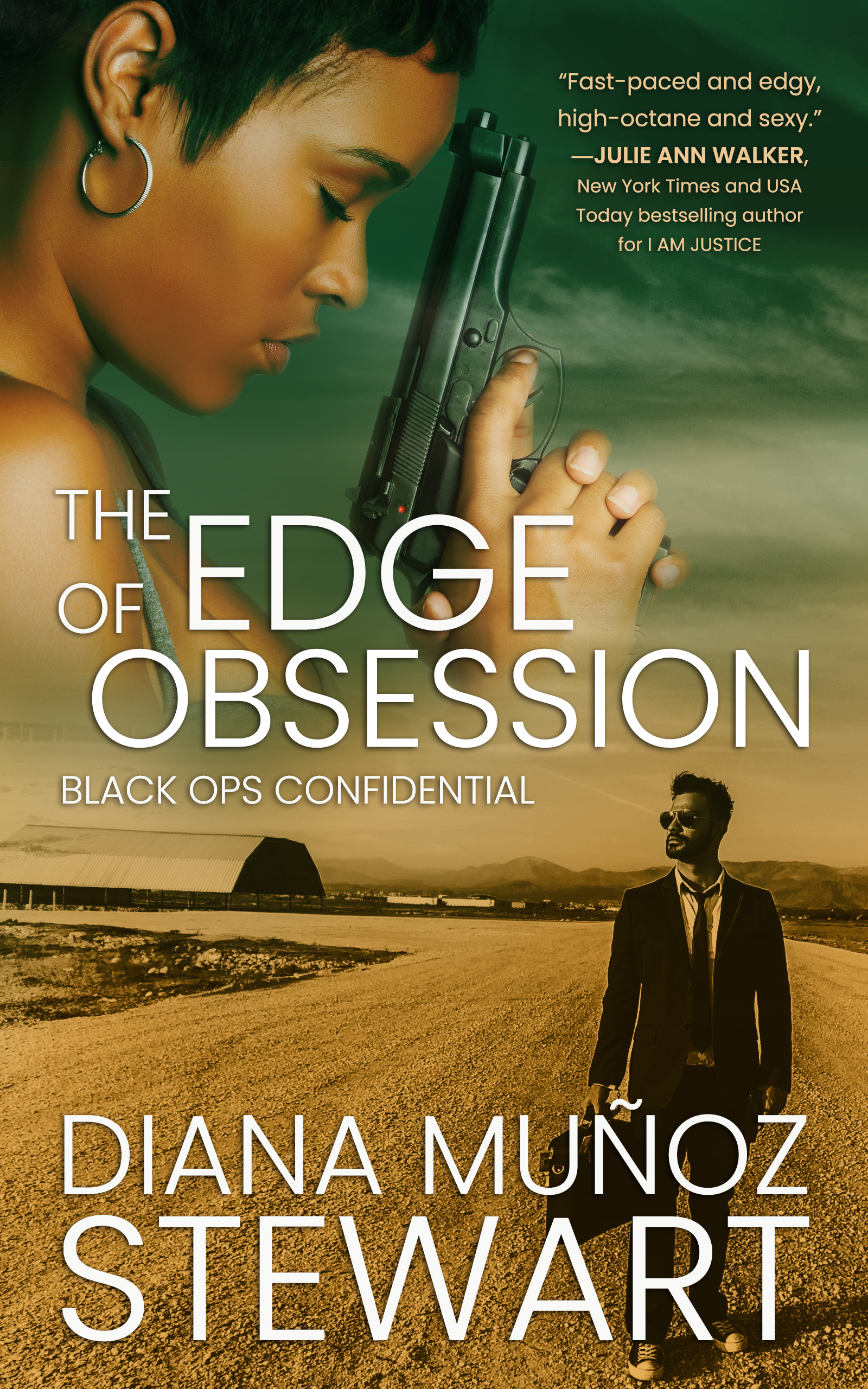 She’s undercover as a nun.

A highly trained vigilante operative, Dada Parish goes undercover as a nun in Mexico. But she struggles to keep the faith after meeting the oh-so-sexy Sion Bradford aka “Juan the Forger.” When she attempts to recruit “Juan” as an asset, her disguise, along with her routine reconnaissance mission, hits a fiery wall. And bursts into flames.

For her, he’ll risk Hell.

Sion Bradford lost everything. Now he’s determined to save others from the same fate. In Mexico, he infiltrates organized crime as “Juan the Forger.” While working to bring the group down, he meets a sexy nun that sets his morality and his libido against each other. But just when he decides to risk Hell, all hell breaks loose. Because while they were watching each other, someone was watching them.

Ten minutes after walking into the Dominican abbey, Dada stood behind a counter serving food at a soup kitchen. Clouds of heat wafted up from the steel food well. Moisture slid along her face and under the habit tight against scalp-short hair.

She was trying very hard to appear angelic, virginal, and whatever pious thing she could think of.

The big lunch crowd proceeded down the line and took seats at folding chairs pushed up to long, white tables. Dada dished out beans and honed her Spanish. Not a problem. Language she could do. That’s what made her such a good undercover operator. Now if she could just get this nun thing down.

Someone in the cafeteria began to play soft music on a worn guitar, and others in the room took up singing a soft Mexican lullaby. It echoed around the open-air cafeteria. Dada met Olga’s eyes. “How can you afford to feed so many refugees?”

“Most don’t stay. And a recent big donation from Parish Industries means we haven’t had to turn anyone away for a while.”

That warmed her heart. It was good that Momma’s donation had served to help. But it was truly the nuns who made it all possible. This soup kitchen was open seven days a week, two times a day.

It was free, but donation boxes dotted the room. People who could afford to eat elsewhere often ate here and gave generously. The food here was that good. The nuns that kind and giving. They showed absolute respect for the people they served.

So when the tension rolled down the line of sisters, like the wave around a sports arena, Dada stilled. Looking past Olga, she scanned for what had caused the unease and sour faces. No, not what. Who.

Six feet something. And that something was fine with a capital F. Wavy auburn hair, sexy beard, and summer brown eyes. The kind of toned body that a man couldn’t hide—even under a flannel shirt. He just had that lumberjack thing going and walked with a slight limp, but in a way that almost looked like a swagger.

Yum. No lie. He was stupendous. And familiar. She knew him? How did she know him?

Her heart ratcheted up its pace. Each beat, like a cart ascending on a roller coaster, clicked higher and higher into her throat as this man, this shaggy mountain man, made his way toward her.

How did she know him? Would he recognize her?

She brushed Olga’s shoulder, getting her attention. “Who is he?”

Olga’s expression soured. “Juan the forger. Works for traffickers—men aligned with the cartel that owns this area. He donates every week, buying trays for people, and bringing one to an older woman in town.”

Scooping rice to the next in line, Olga said, “What is worse—a man who does bad with no concept of right and wrong, or a man who does bad, allowing the bad because he benefits in some way? And then, to assuage his guilt, tries to pay off the church?”

Dada knew the answer to that. In a flash, she was nine again, held prisoner in a room so one man, a very rich French man, could enjoy her when he was in town. He brought her many gifts over her four years of captivity. Taught her. Spoke kindly to her. But none of that made up for the pain and humiliation and fear he’d caused her.

Or for the pregnancy she’d suffered at twelve.

The unborn child she’d fallen in love with, a child her emaciated girl body—sixty pounds lighter, though only a few inches shorter than she was now—could not birth.

Dada slapped down her attraction to the man walking toward her. Slapped it down and put it in chains.

She had to fight from reaching for the leather bracelet at her wrist—the one she wore at all times to remember the child she lost. It was a tell. One she could not afford when there was a chance this man knew her. It would be okay. She had on the nun outfit. She wore brown contacts covering her distinct honey-colored eyes. It had to be okay.

After taking a scoop of yellow rice from Olga, the man stopped in front of Dada. His eyes widened. Her heart plunged. He did recognize her. He did.

Heat spiked in her body. A knowing warmth and an unexpected, and unwelcome thought…It’s him. Him.

Him who? How did she know him? Had they dated? Dada shook herself. Blink. Must blink. Not easy when those bold, dare-me-to brown eyes, framed in a bounty of black lashes, locked on her.

Beside her, Sister Olga said, “Do you want beans or are you filling your belly on looking at Sister Dee?”

His Spanish was good, but a bit awkward. It was the accent. British? That was it. How she knew him. They’d never met. Never dated. The memory of a sleek young man driving down the field with a soccer ball surfaced. The memory of her heart in her throat and her eyes glued to the screen. The memory of admiration and longing.

She knew him from her love of sport. Specifically, her favorite sport. He was a soccer player. An amazing one. Or he had been. If she remembered correctly, he’d been injured right before signing a contract for the Premier League. That explained the limp.

So he now worked for the traffickers? And the traffickers she wanted information from, since they owned this area. Lords and ladies, the mighty had fallen.

A flare of excitement lit her chest. Keep it calm. Wariness was wise, even though this was her kind of luck. No matter what her disguise, how she hid in the world, luck always found her. And because of that luck, she’d learned to accept and jump at opportunity. Just as she’d learned to accept and find a way around complications—knowing something would turn in her favor. Too good to be true, didn’t mean it wasn’t true.

This was a big opportunity wrapped up in a minor complication. Could she use what she knew of him, his past and his obvious guilt, to pressure him? Not exactly a nun-thing to do, but he’d be a great asset. She’d do it. Get close to him, find his weakness, and ignore the way he made her feel.

With her heart still in her throat, she scooped out beans. Her fingers brushed his and a stronger, more certain spark of awareness traveled up her arm and down her spine. A visceral response. A longing. A knowing. A wanting.

His skin bloomed redder and he moved off with a, “Sorry, Sister. Sorry.”

No need to ask what he apologized for. It was obvious. To her. To him. Probably to Olga. One did not make lust eyes at a nun.